This project is dead and has been superseeded by pfQuest

ShaguDB is a database Addon for World of Warcraft Vanilla (1.12.1) Clients. It includes a huge amount of data which contains spawn,drop and quest stuff.

If you are interested in displaying some drop informations, try out the following, it will display all kind of mobs, treasures and so on which the item can be obtained from.

With version 5.0 a new feature was introduced. The “vendor” command.

Additionally ShaguDB includes a (poor) quest integration via ShaguQuest (Extended QuestLog). On every quest you’ll see a “Show” button, which will display all known questrelated stuff on your map. The “Clean” button removes every ShaguDB note from the map.

Due to classic Wow-API restrictions, this Addon is only available for enGB and deDE clients.

It is based on the latest Mangos Zero Database, as well as GMDB. Some parts of the Addon itself are taken from the WHDB Addon. ShaguQuest is basically EQL3 with a few modifications.

If you want to see it in Action, here is a example video, showing the most common features of ShaguDB 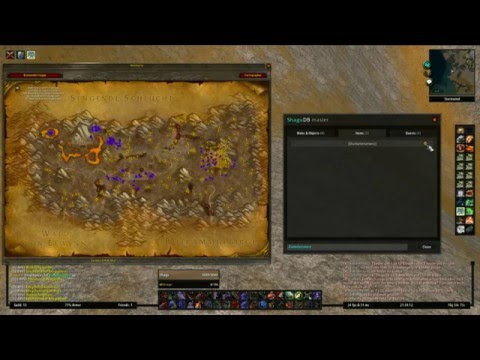 If you want to check it out anyhow, have a look at the release page:

If you’re running a Linux Machine:

After that, all Addons will be built and can then be found in the directory: ./releases