This is an addon for World of Warcraft Vanilla (1.12) and The Burning Crusade (2.4.3). It helps players to find several ingame objects and quests. The addon reads questobjectives, parses them and uses its internal database to plot the found matches on the world- and minimap. It ships with a GUI to browse through all known objects. If one of the items is not yet available on your realm, you’ll see a [?] in front of the name.

The addon is not designed to be a quest- or tourguide, instead the goals are to provide an accurate in-game version of AoWoW or Wowhead. The vanilla version is powered by the database of VMaNGOS. The Burning Crusade version is using data from the CMaNGOS project with translations taken from MaNGOS Extras.

pfQuest is the successor of ShaguQuest and has been entirely written from scratch. In comparison to ShaguQuest, this addon does not depend on any specific map- or questlog addon. It’s designed to support the default interface aswell as every other addon. In case you experience any addon conflicts, please add an issue to the bugtracker.

You can check the [Latest Changes] page to see what has changed recently.

World of Warcraft: The Burning Crusade

The development version includes databases of all languages and client expansions. Based on the folder name, this will launch in both vanilla and tbc mode. Due to the amount of included data, this snapshot will lead to a higher RAM/Disk-Usage and slightly increased loading times.

The addon ships an entire database of all spawns, objects, items and quests and therefore includes a huge database (~80 MB incl. all locales) that gets loaded into memory on game launch. However, the memory usage of pfQuest is persistent and does not increase any further over time, so there’s nothing bad on performance at all. Depending on the download you pick (especially the full packages), you might see a message that warns you about an addon consuming too much memory. To get rid of that warning, you can set the addon memory limit to 0 which reads as no limit. This option can be found in the character selection screen. 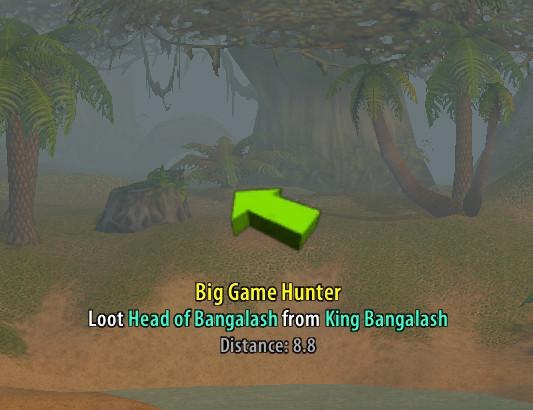 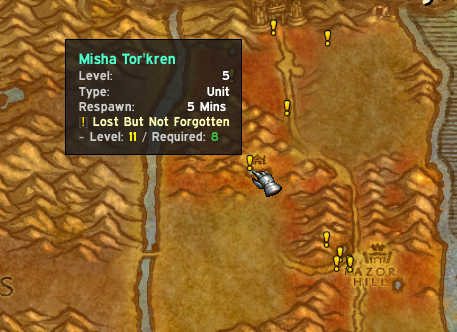 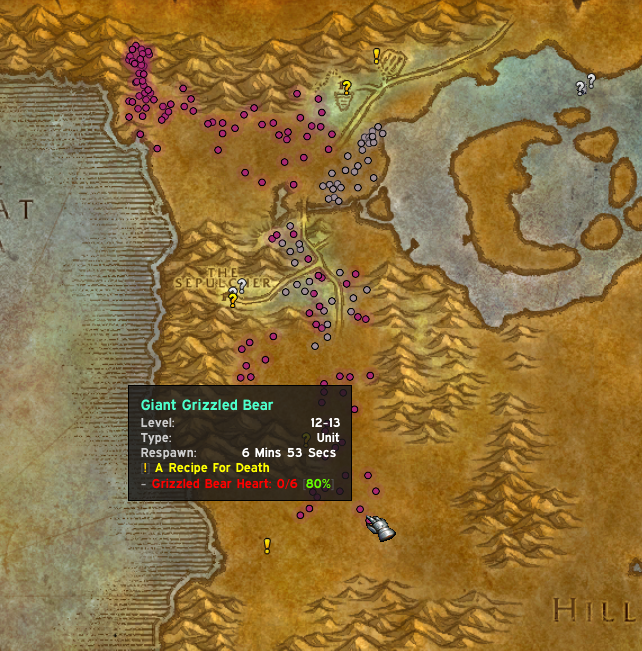 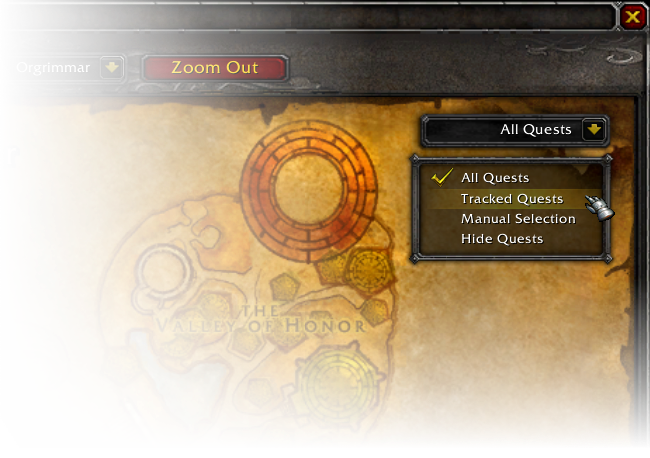 The addon features 4 different modes that define how the new or updated questobjectives should be handled. Those modes can be selected on the dropdown menu in the top-right area the map.

Every quest will be automatically shown and updated on the map.

Only tracked quests (Shift-Click) will be automatically shown and updated on the map.

Same as “Manual Selection” and in addition to that, Quest-Givers won’t be shown automatically. Also completed quest objectives will remain on the map. This mode won’t touch any of the map nodes created. 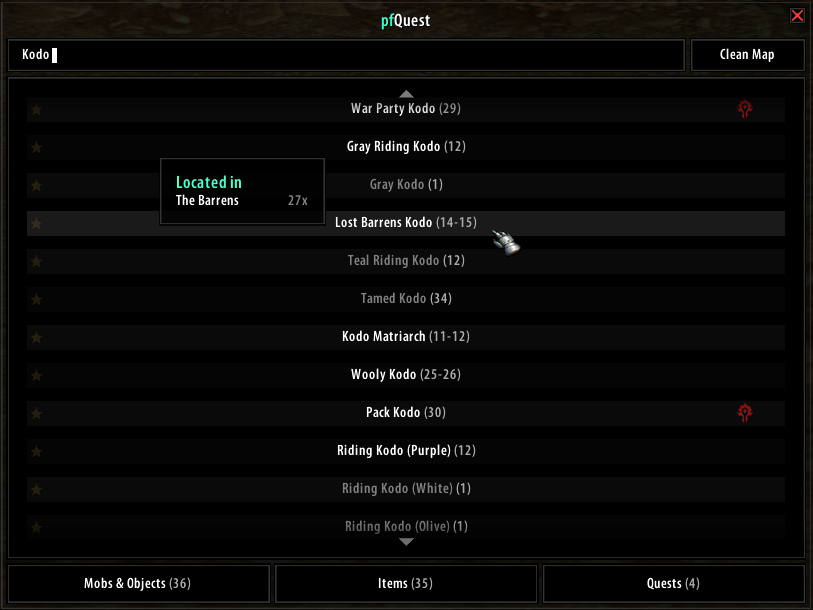 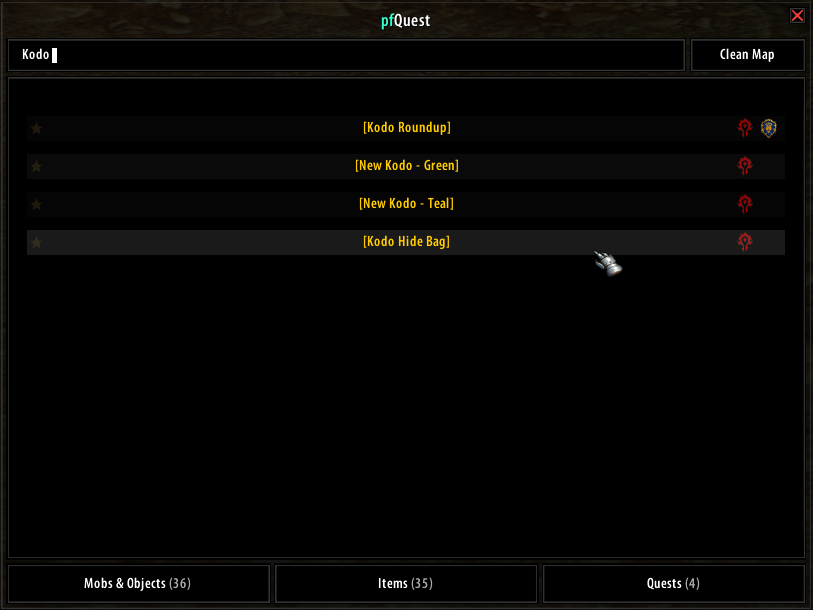 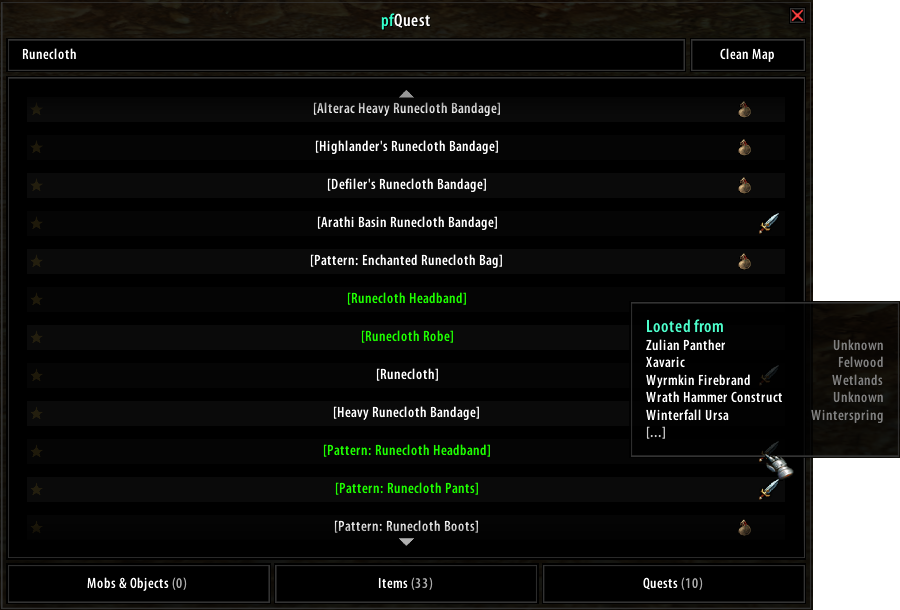 The database GUI allows you to bookmark and browse through all entries within the pfQuest database. It can be opened by a click on the pfQuest minimap icon or via /db show. The browser will show a maximum of 100 entries at once for each tab. Use your scrollwheel or press the up/down arrows to go up and down the list.

On servers that support questlinks, a shift-click on a selected quest will add a questlink into chat. Those links are similar to the known questlinks from TBC+ and are compatible to ones produced by ShaguQuest, Questie and QuestLink. Please be aware that some servers (e.g Kronos) are blocking questlinks and you’ll have to disable this feature in the pfQuest settings, in order to print the quest name into the chat instead of adding a questlink. Questlinks sent from pfQuest to pfQuest are locale independent and rely on the Quest ID.

The tooltip will display quest information such as your current state on the quest (new, in progress, already done) as well as the quest objective text and the full quest description. In addition to that, the suggested level and the minimum level are shown. 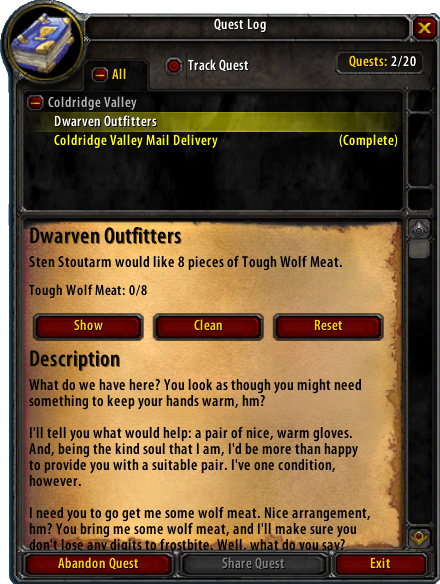 The questlog will show 4 additional buttons on each quest in order to provide easy manual quest tracking. Those buttons can be used to show or hide individual quests on the map. Those buttons won’t affect the entries that you’ve placed by using the database browser.

Show
The “Show” button will add the questobjectives of the current quest to the map.

Hide
The “Hide” button will remove the current selected quest from the map.

Clean
The “Clean” button will remove all nodes that have been placed by pfQuest from the map.

Reset
The “Reset” button will restore the default visibility of icons to match the set values on the map dropdown menu (e.g “All Quests” by default).

The addon features a CLI interface which allows you to easilly create macros to show your favourite herb or mining-veins. Let’s say you want to display all Iron Deposit deposits, then type in chat or create a macro with the text: /db object Iron Deposit. You can also display all mines on the map by typing: /db mines. This can be extended by giving the minimum and maximum required skill as paramter, like: /db mines 150 225 to display all ores between skill 150 and 225. The mines parameter can also be replaced by herbs, rares, chests or taxi in order to show those instead. If /db doesn’t work for you, there are also some other aliases available like /shagu, pfquest and /pfdb.